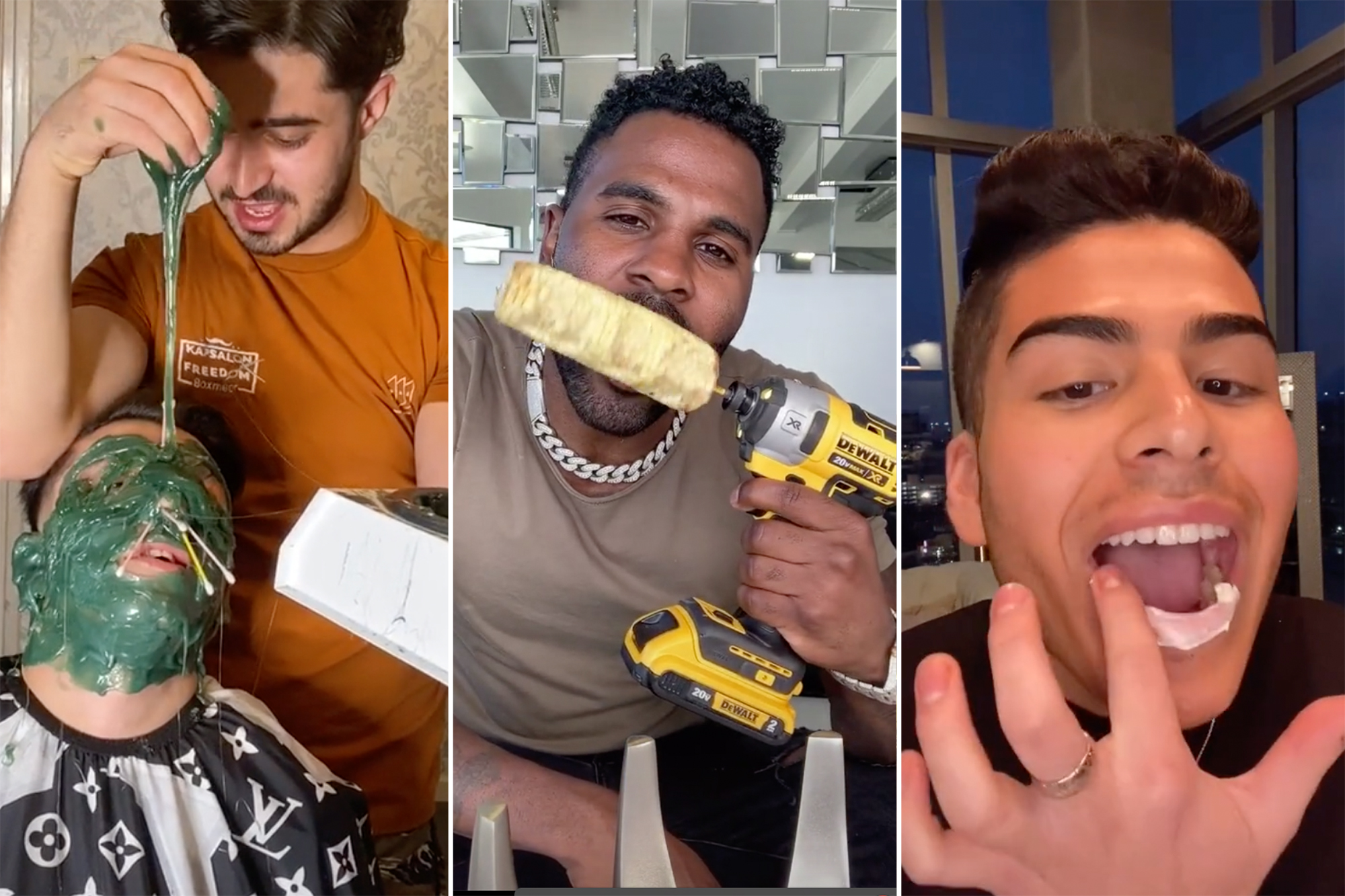 Created in 2016 as a portal for short, humorous clips, TikTok has recently become synonymous with something far more sinister: viral internet challenges.

Pull up the video-sharing app and you’ll inevitably see opportunistic bozos risking their reputations and even bodies on camera for social media clout — like if Snapchat was created by the “Jackass” guys.

In the most notorious stunt recently, a female TikTokker wound up in the hospital after trying to style her hair with gorilla glue.

Unfortunately, the app’s eyeball-seeking algorithm makes it extremely difficult for these oft-harmful trends to be nipped in the bud before they metastasize across the internet.

To help readers know what to avoid, we’ve compiled a list of challenges so ludicrous we might want to reconsider a TikTok ban.

This might not be a challenge per se. However, Louisiana’s Tessica Brown undoubtedly cemented her place on TikTok stupidity’s Mount Rushmore after slathering her hair with Gorilla Glue and having to get it surgically repaired during a four-hour procedure.

Unfortunately, this cautionary tale might not stick as Brown’s adhesive mishap landed her $20,000 dollars in donations, hundreds of free hair products and even a full-time agent — not to mention an unfortunate imitator.

Speaking of superglue fiascos, holiday revelers went viral this past Halloween after supergluing costume vampire fangs to their teeth. The cringe-worthy clips — which, using the hashtag #VampireFangs, amassed over 9 million views — depicted various bozos struggling to remove the faux chompers after fastening them to their incisors using Super Glue, nail glue and other adhesives.

Go figure: Dentists advised against this practice, citing the fact that nail glue “is poisonous and won’t come off.”

Although in the realm of toothless TikTok challenges, DIY vampire fangs pale in comparison to these amateur cosmeticians remodeling their chompers with nail files.

For the uninitiated, the challenged involved various knuckleheads attempting to fix their uneven smiles by using a nail file to sand their snack slicers down to size. It was basically the bargain-bin equivalent of an enameloplasty — a reshaping procedure involving enamel removal that one would receive from a cosmetic dentist.

However, unlike the latter, these freelance molar makeovers sparked an outcry from the dental community.

Full facial waxing is the hot new beauty fad with vids of the procedure collectively amassing millions of views on TikTok.

The procedure, demonstrated here by Kapsalon Freedom barbershop in the Netherlands, involves caking a patient’s face — including their eyes — with gloopy green wax as if casting a mold for the “House of Wax” horror movie. They even have wax-dipped Q-Tips stuck in their noses to extract pesky nasal hairs. When finished, the rogue beautician peels the beauty batter off the subject’s face in one piece like a slasher villain mask.

Skin experts are calling the process traumatic “for the skin, especially sensitive areas such as those found around the eyes.”

TikTok cosmeticians redefined maintaining a stiff upper lip after trying to plump their pouts with erection cream on camera. While one influencer did succeed in fluffing his flappers to life raft proportions, he had to stop the stunt early due to the burning sensation.

Meanwhile doctors said that the hack is “utterly ridiculous and can be extremely dangerous,” adding that the “temporary” procedure could lead to adverse reactions including soreness, swelling and blisters, as well as blood pressure fluctuations and “possible heart problems.”

As part of a series of viral lifehacks, enterprising TikTokkers tried to accelerate their corn consumption by eating a cob affixed to a spinning drill bit. This Loony Toons-evoking feat gained international attention after rapper Jason Derulo chipped a tooth while performing the stunt.

This one just seems nasty from the outset, but it also could have a potentially dangerous end result. In this test of wills, a person pours milk and cereal into the open mouth of a person lying down and then eats breakfast from the human “bowl.” Needless to say, things can get super, super messy, not to mention become a choking hazard for the volunteer vessel. “If you guys are cool with cereal in your lungs after you choke that’s cool too I guess,” remarked @Mandi2341 on Twitter.

TikTok provides an extensive list of “community guidelines” that state the company does not allow “content that is excessively gruesome or shocking, especially that promotes or glorifies abject violence or suffering.” It also outlines “risky activities or other dangerous behavior” that are not allowed, including activity that “encourages, promotes, or glorifies such behavior, including amateur stunts or dangerous challenges.”

The title says it all.

This viral craze — reportedly originating in Venezuela as “rompcráneos,” or “skull breaker” — depicts three friends (we use the term loosely) jumping next to each other as the bookending buds kick the middle guy’s feet out from under him. The action sends the person crashing to the ground, landing on their back and hitting their head in the process.

Not only has the alarming trend led to injuries in Miami, New Jersey and Arizona, but Daytona Beach, Florida police have charged two high school teens with misdemeanor battery and cyberbullying following an incident there. In addition, two students in Mexico did their own version of the “skull breaker,” but reportedly used a sweater instead of their feet to trip a girl into doing a face-plant.

Doctors have unsurprisingly condemned the practice for its potential to cause “serious and life-threatening injuries,” ranging from “skull fracture to paralysis and death.”

This shocking fad involves sliding a penny behind a partially plugged-in phone charger, as seen in multiple viral videos circulating on YouTube and TikTok.

While the prank may seem innocuous, the coin can strike the metal prongs, causing “sparks, electrical system damage, and in some cases, fire,” warned Massachusetts Fire Marshall Peter J. Ostroskey in an advisory issued last year.

Case in point: The marshal obtained a photo of a scorched outlet in Holden reportedly caused by the viral prank. In another incident, a student at Plymouth North High School allegedly started a fire after performing the challenge in what Plymouth Schools Superintendent Dr. Gary Maestas called an “irresponsible act. Fortunately, no one was injured — but the accidental arsonist was charged for the crime.

This inflammatory challenge, which involves taking enough Benadryl to hallucinate and posting the footage on the video-sharing platform, resulted in the death of a 15-year-old Oklahoma girl last year.

This, along with several other near-fatal incidents, prompted Pharmaceutical giant Johnson & Johnson and the FDA to issue PSAs warning teens not to abuse the antihistamines.

This ridiculous TikTok trend involved teen drivers swerving all over the road like maniacs in time with the stunt’s namesake dance anthem, first released 20 years ago by DJ Casper a k a Mr. C The Slide Man.

Despite the obvious risks, the trend has taken TikTok by storm, reportedly causing several near-accidents by participants. “The car almost flipped,” reads the caption to a video of one TikTokker performing the stunt with friends.

TikTok warns viewers on several clips that “the action in this video could result in serious injury.”

Nothing to ward off the coronavirus doldrums like a viral video leak, right? At least that’s what one bored livestreamer thought when he heeded nature’s call on camera, inspiring scores of other lonely TikTokkers to follow suit like a Pied Pee-per.

The #peeyourpantschallenge hashtag currently quickly racked up 3.9 million views on TikTok, as well as a flurry of criticism from horrified commenters.

“People seriously need to get back to work soon . . . everybody has gone insane,” sputtered one.

In an even sicker stunt, these parents in lockdown smeared excrement on their progeny and filmed their aghast reactions. “WTF” seemed to be the overwhelming response.

These moms and dads crapped on their kids figuratively by calling them a “mistake” and in some instances mentioning the word “abort.”

These moms bided the lockdown in titillating fashion by exposing their breasts to their babies and recording their enticed reactions.

Called the #DropEmOutChallenge, these jokester mamas post their videos with Wheeler Walker Jr.’s song “Drop ‘Em Out” playing in the background. The country tune’s lyrics are particularly fitting for this game.

Seemingly from behind the camera, the moms bare it all to their hungry, breast-fed babies, filming the excited expressions.

Sauciness takes a turn for the worst courtesy of this salty social media swag.

After months of being bored in the house owing to the pandemic, in June, men voluntarily slam-dunked their junk into small containers of soy sauce in hopes of tasting the savory Asian condiment — typically used to boost the taste of sushi — on their tongues.

The tasty testes trend stemmed from a resurfaced 2013 study which found that mice can determine taste through their testicles.

Once the challenge his digital timelines, guys everywhere we’re unzipping their flies and using their goodies as saucy napkins in the name of science.

Also known as the “passout challenge” and “the fainting game,” participants of the deadly, albeit popular Black-out challenge were dared to choke themselves until they pass out for several seconds.

A 10-year-old girl in Italy tied a belt around her neck and accidentally asphyxiated herself in January. She was rushed to a hospital in Palermo where doctors ultimately pronounced her brain-dead.

TikTok encouraged users to flag any account holders engaging in the dangerous trend.

Ava Louise, a regular attention-seeker on Dr. Phil, took her clout-chasing to the clouds in March when she went viral for licking airplane toilet seats.

Small screen seduction hit a hard stop after perverts found a way to bring a cheeky trend to a creepy end.

Originally, hotties were taking to TikTok to show off their amazing bodies behind a red filter that covered up their private parts. But, geeky freaks found a way to remove the filter and get an eyeful of the women’s unmentionables.