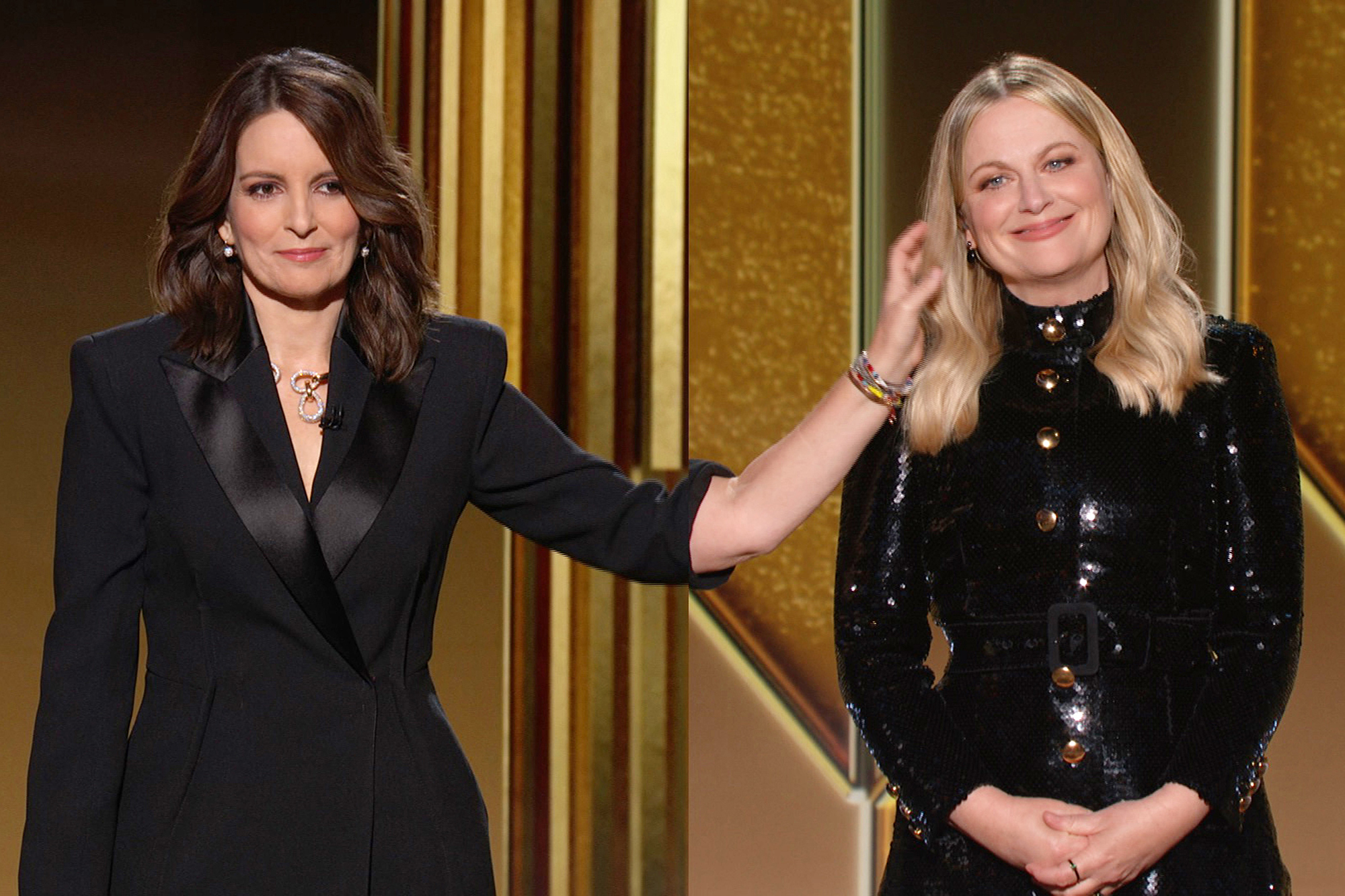 Amy Poehler and Tina Fey got straight to the point.

During the 2021 Golden Globes broadcast, the co-hosts and former “SNL” queens immediately addressed the lack of black members in the Hollywood Foreign Press Association following a damning report that led to a Time’s Up protest.

“The HFPA is made up of about 90 international no black journalists,” Fey, 50, cracked. “We say around 90 because a couple of them might be just ghosts and it’s rumored the German member is just a sausage that somebody drew a little face on.”

“This is something we probably should have told you earlier, everyone is understandably upset at the HFPA and their choices,” Poehler, 49, admitted in her opening monologue before cutting to the chase: “A lot of flashy garbage got nominated. But that happens, that’s like their thing. A number of black actors and black-led projects were overlooked.”

“We all know awards shows are stupid,” said Fey, to which Poehler responded: “We all know they’re a scam invented by big red carpet.”

“Inclusivity is important and there are no black members of the HFPA,” Fey said. “I realize you didn’t get the memo, HFPA, because your workplace is the back booth of a French McDonald’s, but you gotta change that. So here’s to changing it.”

After the co-hosts’ biting bit, members of the HFPA also addressed the controversy.

“We must ensure everyone from all underrepresented communities get a seat at our table — and we are going to make that happen,” said former HFPA president Meher Tatna, of India.

HFPA vice-president Helen Hoehne, of Germany, continued: “While we celebrate the work of artists from around the globe, we recognize we have our own work to do. Just like in film and television, black representation is vital. We must have black journalists in our organization.”

The organization’s current president, Ali Sar of Turkey, added, “That means creating an environment where diverse membership is the norm not the exception. Thank you and we’ll look feared to a more inclusive future.”

The Golden Globes came under fire after an exposé found that the HFPA, the Globes’ elusive group which selects nominees and hands out honors, does not have a single black member in its rankings.

The industry activist group Time’s Up launched a #TimesUpGlobes protest campaign Friday, calling out the HFPA over the lack of diversity.

“A cosmetic fix isn’t enough,” one of the group’s tweets read, a sentiment that was echoed by mega-producer Shonda Rhimes as well as A-list actors Kerry Washington, Alyssa Milano, Amy Schumer and more.

Several celebrities joined in to support the movement on Twitter, including Judd Apatow, who wrote: “So many crazy things about the @goldenglobes and the Hollywood Foreign press but this is awful. #timesupglobes.”

The Screen Actors Guild union also shared a lengthy statement with The Post just before Sunday’s Golden Globes broadcast, declaring, “SAG-AFTRA is proud to stand shoulder to shoulder with our fellow creative industry guilds and unions, industry allies and all inclusion advocates in calling on the Hollywood Foreign Press Association to establish a more inclusive membership that truly reflects the extraordinary diversity and variety of the global media industry they purport to represent.”

The statement continued, “From Black Lives Matter and the #metoo movement to our own diversity, equity and inclusion efforts, we fight every day for a more equitable and just society. By now, we all should understand this fundamental point: It is basic human decency to ensure inclusion on set, on screen, in front of and behind the camera, in boardrooms and in the very fabric of our everyday lives. SAG-AFTRA urges our industry’s institutions to step up and hold themselves accountable for true, meaningful change in all aspects of their work.

As our colleagues across the industry say, TIME’S UP. The time for change is now.”

The Los Angeles Times posted the initial shocking report about the “insular, improbably powerful group” and the mysterious identities of its 87 members, who often keep “low profiles.” While it found that the group has does have some members of color, there are no black members, which HFPA confirmed.

On Thursday, the HFPA pledged to “bring in black members.”

“We are fully committed to ensuring our membership is reflective of the communities around the world who love film, TV and the artists inspiring and educating them,” the organization said in a statement to the Los Angeles Times. “We understand that we need to bring in Black members, as well as members from other underrepresented backgrounds, and we will immediately work to implement an action plan to achieve these goals as soon as possible.”

For this year’s nominations, there were notable snubs for widely acclaimed films such as Spike Lee’s “Da 5 Bloods” and Shaka King’s “Judas and the Black Messiah” for the top big-screen honors — though “Judas” star Daniel Kaluuya scored a nod for a “supporting role.” HBO’s “Lovecraft Country” was nominated for best TV drama — but the entire cast was overlooked for acting nods.

The nominees, the HFPA told the LA Times last week, were at the discretion of members.

“We do not control the individual votes of our members,” HFPA said in a statement to the Los Angeles Times. “We seek to build cultural understanding through film and TV and recognize how the power of creative storytelling can educate people around the world to issues of race, representation and orientation.”