The infamous members-only Los Angeles TikTok incubator where influencers go for both viral video shooting space and clout has a new competitor in Santa Monica, California.

This six-bedroom, nine-bathroom Spanish-style mansion dubbing itself “TikTok West” is 6,300 square feet and decked out with every amenity a TikToker could want — and that’s a lot more than just a ring light.

Designer and diet alcohol entrepreneur Julie Stevens purchased this house in 2006 for $2.8 million, according to Realtor.com. She redesigned the house and raised her kids there before discovering that such a beautiful home can be hard to sell.

The property was first listed for $5.8 million in October 2020 and reduced to $5.5 million in September.

But it is slated to return to the market for $5.3 million next week — with a one-of-a-kind sales strategy — garnering a collaborative of young TikTokers to market the house.

During the month of April, TikTok influencers can apply to spend two hours filming in this staged, amenity-heavy house. Unlike the original Hype House, this mansion won’t be hosting parties or letting influencers stay overnight.

But eligible TikTokers get access to the house’s two-floor pool slide, recording studio and incredible architecture all for free, as long as they tag the Realtor and the seller for exposure.

“They get to film great content in locations they wouldn’t otherwise have access to, and we ask them to tag the house to get more exposure. We’re getting younger, different eyes on the property,” listing broker Rochelle Maize of Nourmand & Associates told The Post.

So far, they have 15 applications, and one TikToker has already gotten started. On March 31, a yet-to-be-revealed female TikTok influencer filmed near a bubble-like Murano Due Ether chandelier.

The light fixture featured in the mansion’s first TikTok hangs over a spiral maple staircase with a curved glass railing, designed by the owner. The staircase is bathed in natural light from the numerous windows.

“It’s held up by two points in the wall, so it looks like it’s floating,” Stevens told The Post. The property is slated to be on the market by Friday, April 9.

What else does Hype House West offer TikTokers?

Approach the mansion from a curved, lit marble stairway, passing a lily pond with a two-tier waterfall with an S-shaped sculpture flanking the entry. The door is a quilt of rectangular tempered glass, contrasted by an S-shaped door handle.

The house was staged with an eye toward neutral, airy design by luxury furniture and design company Vesta. 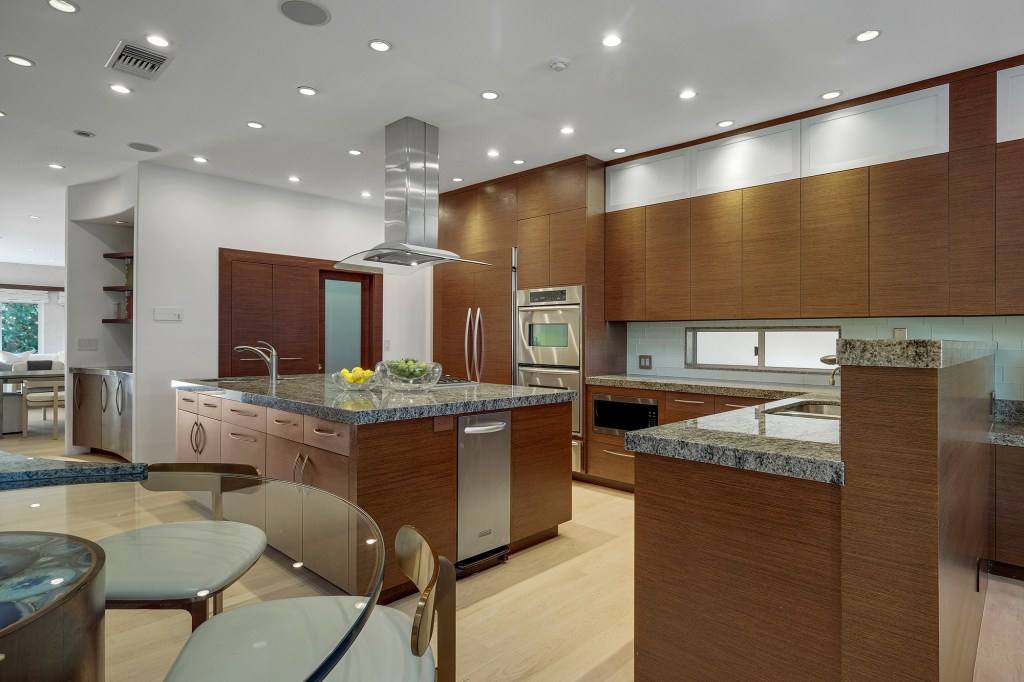 The kitchen has a huge industrial hood and dark wood cabinetry. 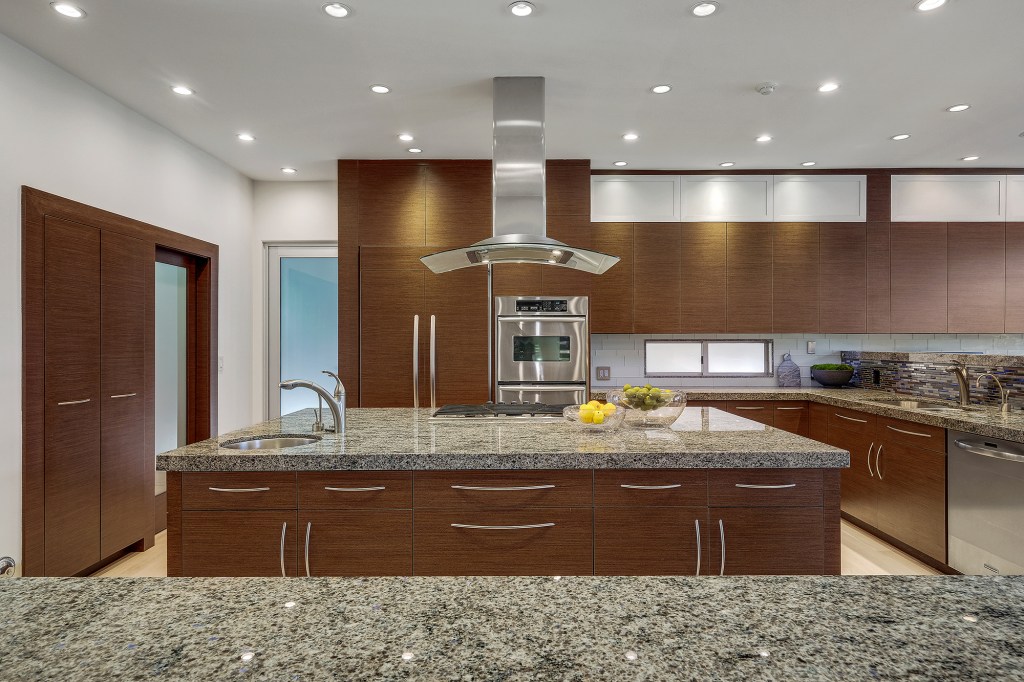 A wet bar next to the kitchen is stocked with BeTini drinks, a diet martini cocktail company founded by Stevens.

The kitchen has a huge industrial hood and dark wood cabinetry. A wet bar next to the kitchen is stocked with BeTini drinks, a diet martini cocktail company founded by the home’s owner.

The family room has a honey onyx mantle fireplace, lit inset gallery displays and a television. A large window gives views into the backyard, which has a two-story pool slide.

The backyard has an elevated deck with a waterslide leading down to a modern stone-lined pool. The slide curves down from a patio above the garage, to a treehouse which is accessible by ladder, into the pool.

A sitting area includes an outdoor kitchen with a grill, a refrigerator and a stone bar. The built-in wooden bench is decorated with small white pillows, and the table offers seating for six.

The yard is filled with flowers and greenery and even has a fountain and a basketball hoop, according to a previous listing for the property. 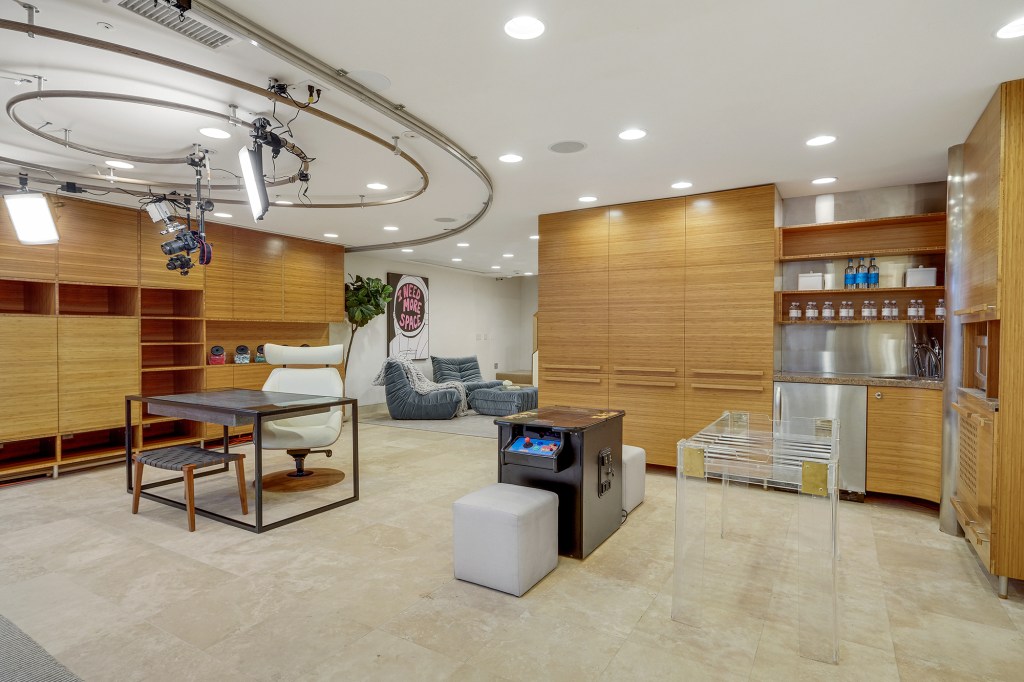 “The basement level was already an incredible creative space with speakers and lighting set up already because Julie’s children had used it for filming and creative things they were doing,” Maize told The Post. 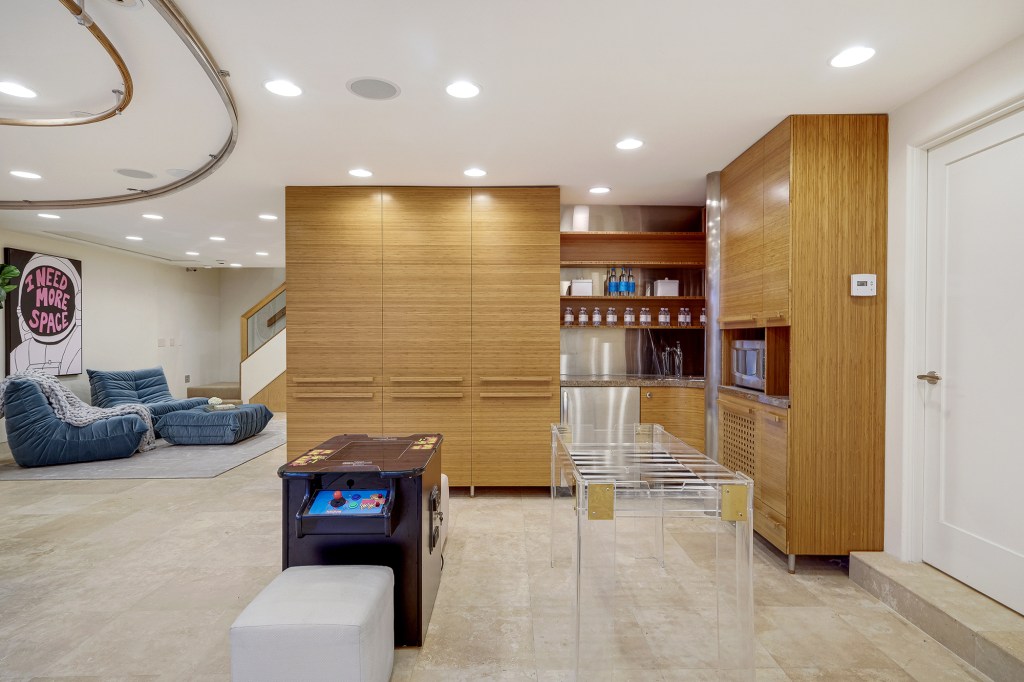 The property is slated to return to the market for $5.3 million in a few weeks — with a new sales strategy.

The basement has a soundproofed music studio, a grand piano, a movie theater, a kitchenette, a nanny room, a kiln room, a sewing room and a wine room with a champagne drawer.

“The basement level was already an incredible creative space with speakers and lighting set up already because Julie’s children had used it for filming and creative things they were doing,” Maize told The Post. “I immediately felt how creative and great it was and wanted to transition it into something even better.” 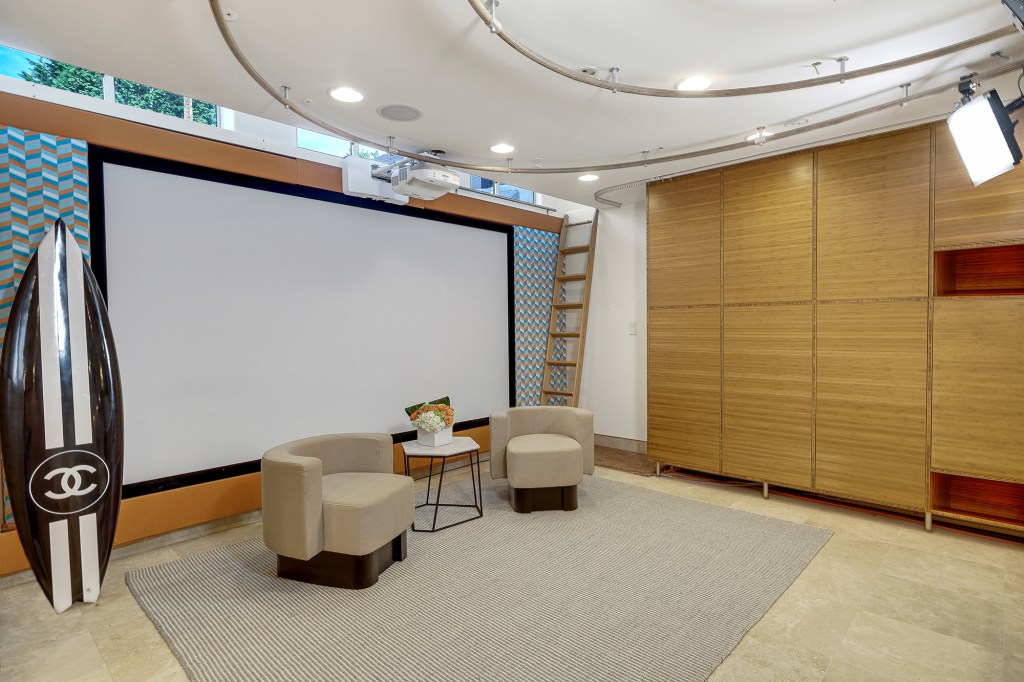 The home theater is pictured alongside custom seamless pop-out cabinetry. 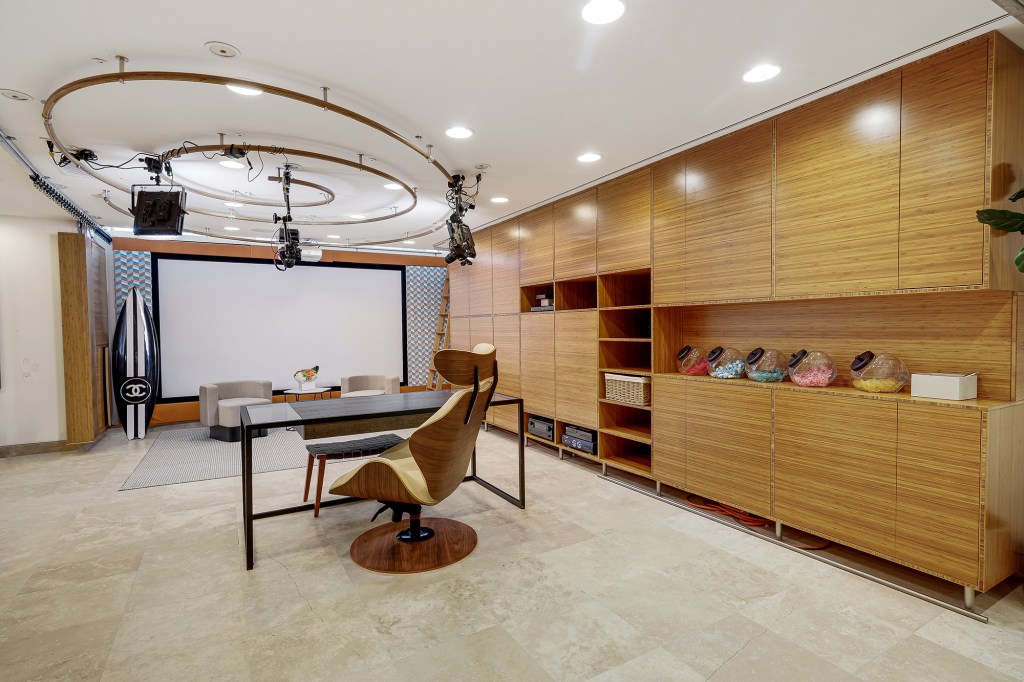 The basement has a large swirling sculpture on the ceiling. 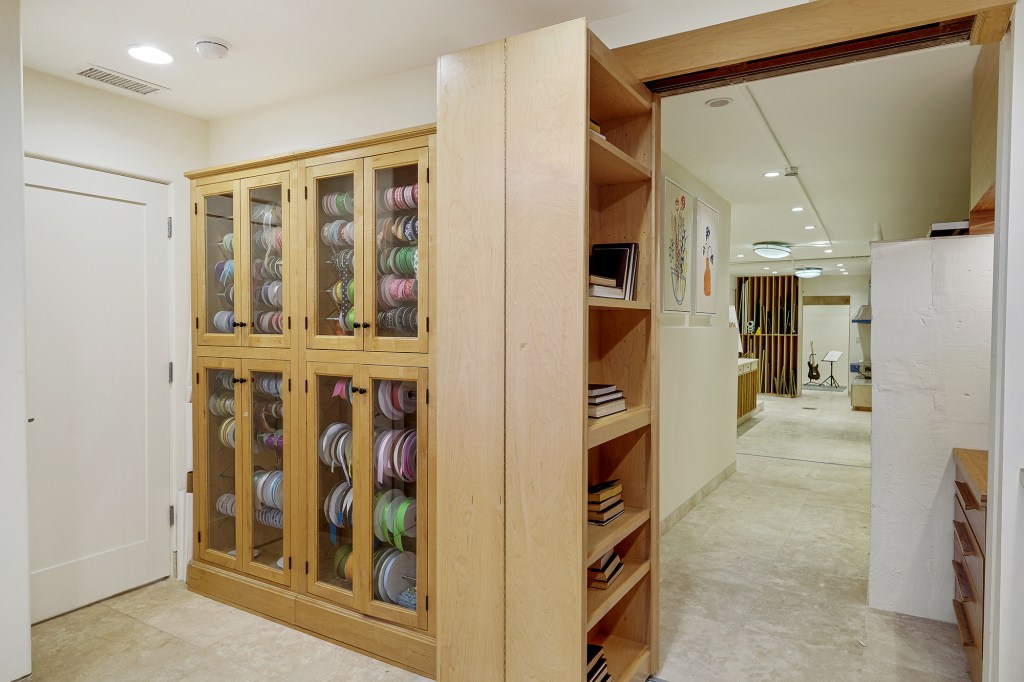 A “secret room” behind a bookshelf is perfect for sewing, arts and crafts. 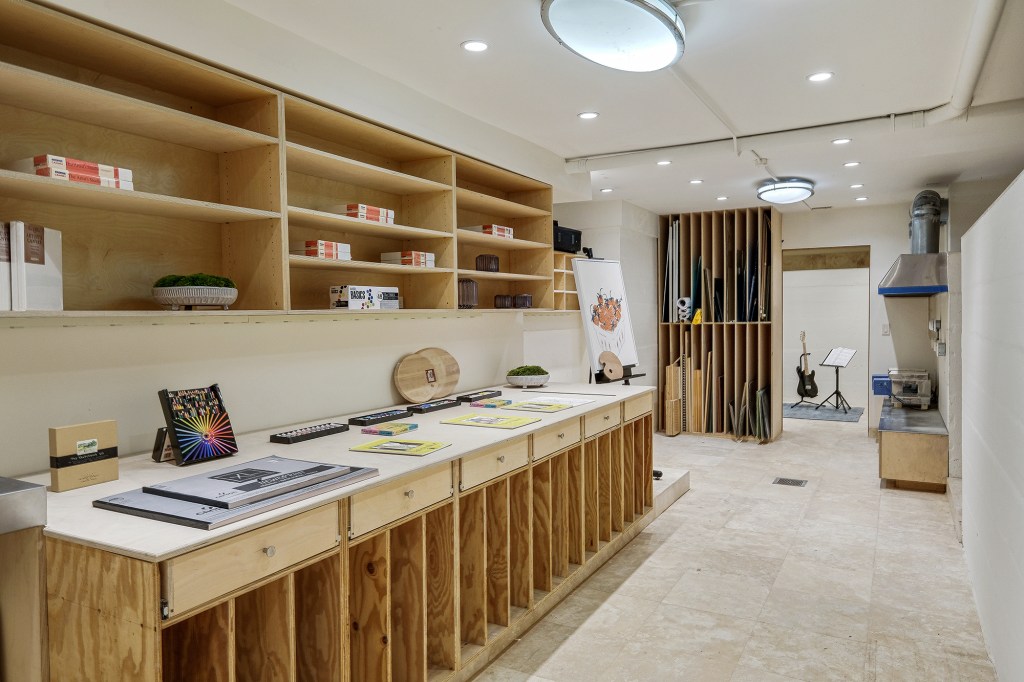 The basement has a nanny room, a kiln room, a sewing room and a wine room with a champagne drawer.

TikTok, which was originally known for its dance videos, has become a booming content creation hub during the pandemic, drawing political ire near the end of Trump’s term as he considered a ban.

Millions of new TikTokers have joined the app, and the luckiest have been accepted to the Creator Fund, which is intended to help influencers pursue content creation full-time. Top influencers include Charli D’Amelio and Addison Rae, both of whom spent time developing their videos in the original Hype House.

The original Hype House has had several addresses but currently is located on Weidlake Drive in Los Angeles.