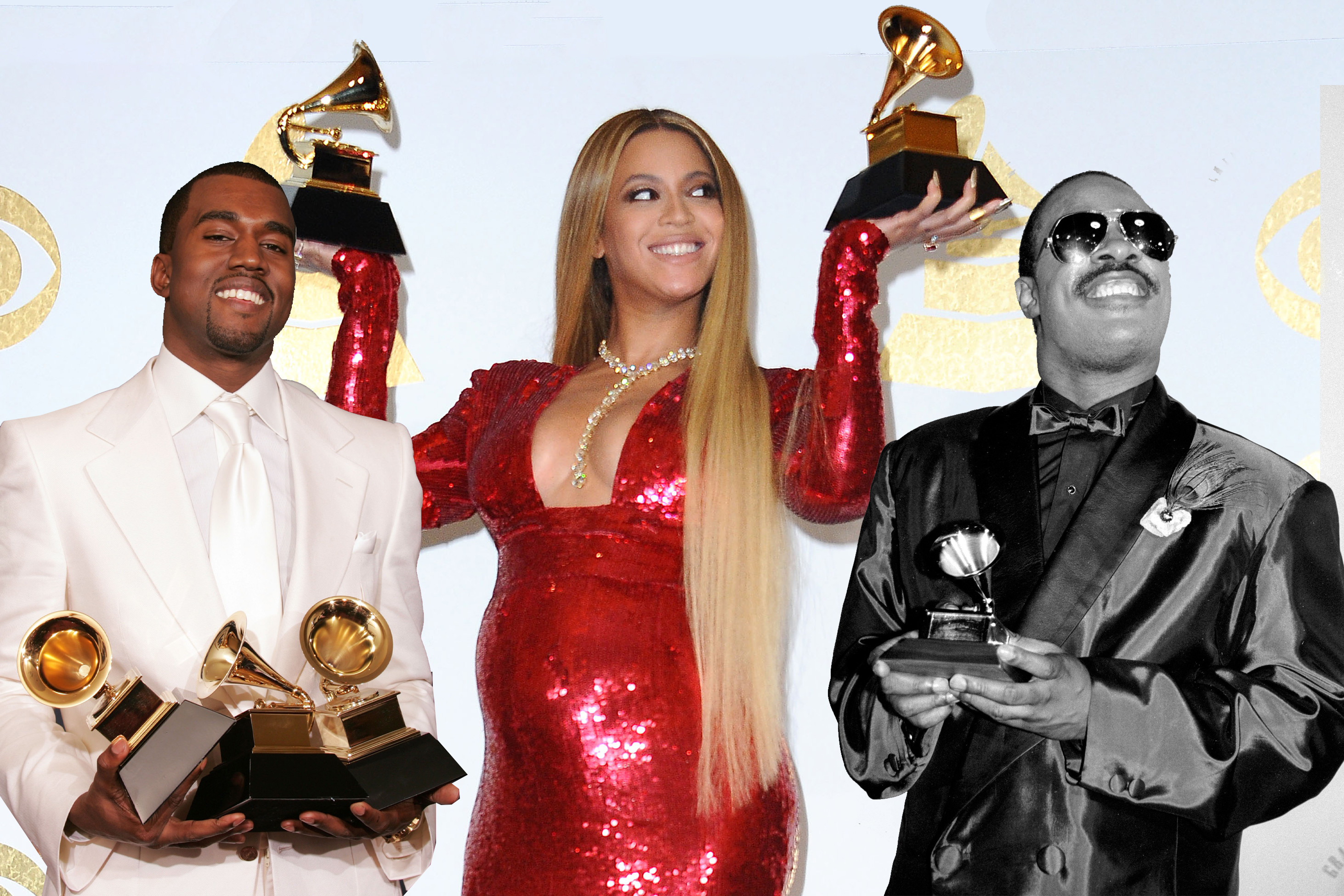 With 31 golden gramophones to his credit, the most decorated musician in Grammy Awards history — the late orchestra conductor Georg Solti — is hardly a household name. But there are plenty of famous pop stars — from Stevie and Kanye to Beyoncé — who have racked up those trademark trophies, too.

With Grammys 2021 upon us Sunday at 8 p.m. on CBS, here are the top 10 nonclassical winners of music’s biggest night.

Not only was Jones, 88, a part of Michael Jackson’s historic “Thriller” sweep in 1984 as producer of that classic LP, he also won Album of the Year for his own “Back on the Block” in 1991. Right behind Solti on the all-time list, Q first triumphed for Best Instrumental Arrangement (of the Count Basie Orchestra’s “I Can’t Stop Loving You”) in 1964.

The bluegrass queen, 49, has tasted victory both on her own and with her group Union Station. But her biggest wins came with Robert Plant in 2009, when the unlikely pair won Album of the Year (“Raising Sand”) and Record of the Year (“Please Read the Letter”).

This R&B icon, 70, holds the distinction of winning Album of the Year three times — a record he shares with Frank Sinatra and Paul Simon. He triumphed for three consecutive LPs: 1973’s “Innervisions,” 1974’s “Fulfillingness’ First Finale” and 1976’s “Songs in the Key of Life.”

The legendary film composer, 89, just broke his own record with his 52nd Oscar nomination (Best Original Score for “Star Wars: The Rise of Skywalker”). But while he’s only taken home five Academy Awards, he’s won nearly five times as much at the Grammys, most recently in 2017.

The Queen B, 39, first received Grammy love as a member of Destiny’s Child, winning two awards for their No. 1 smash “Say My Name” in 2001. Since then, Grammy has said her name 22 more times, including five wins with husband Jay-Z — for their hit singles “Crazy in Love” and “Drunk in Love,” plus their joint album “Everything Is Love.”

Note: Beyoncé has never won Album of the Year throughout her career — she’s not up for the 2021 honor because she didn’t release a project during the eligibility period — but she is the most nominated act ever with 79 nods. With nine nominations at this year’s ceremony, she could surpass Alison Krauss’ 27 wins to become the most decorated woman in Grammys history.

This late jazz pianist won Grammys in every decade since the ’70s, starting in 1976 (Best Jazz Performance by a Group for “No Mystery,” with Return to Forever) and most recently in 2015 (Best Jazz Instrumental Album for “Trilogy”). It’s no wonder Corea, who died in February at 79, was inducted into the Grammy Hall of Fame in 1999.

Beyoncé’s hubby is a big-time Grammy boss, too, with the lion’s share of his hardware coming in the rap categories — his first being for Best Rap Album (“Vol. 2 … Hard Knock Life”) back in 1999. But the 51-year-old has never won any awards in the Big Four fields (Album, Record and Song of the Year, plus Best New Artist).

Starting with his 1990 victory for Best Country Vocal Performance, Male (for “When I Call Your Name”), the singer-guitarist, 63, has come up big in the country categories over the years. But his last win came in another field: Best American Roots Song (“Kid Sister”) in 2017.

Despite three consecutive Album of the Year nominations (for 2004’s “The College Dropout,” 2005’s “Late Registration” and 2007’s “Graduation”), Yeezy, 43, has never copped that coveted prize. Still, he has been able to console himself with 21 other gramophones, most recently winning three awards with Jay-Z in 2013.