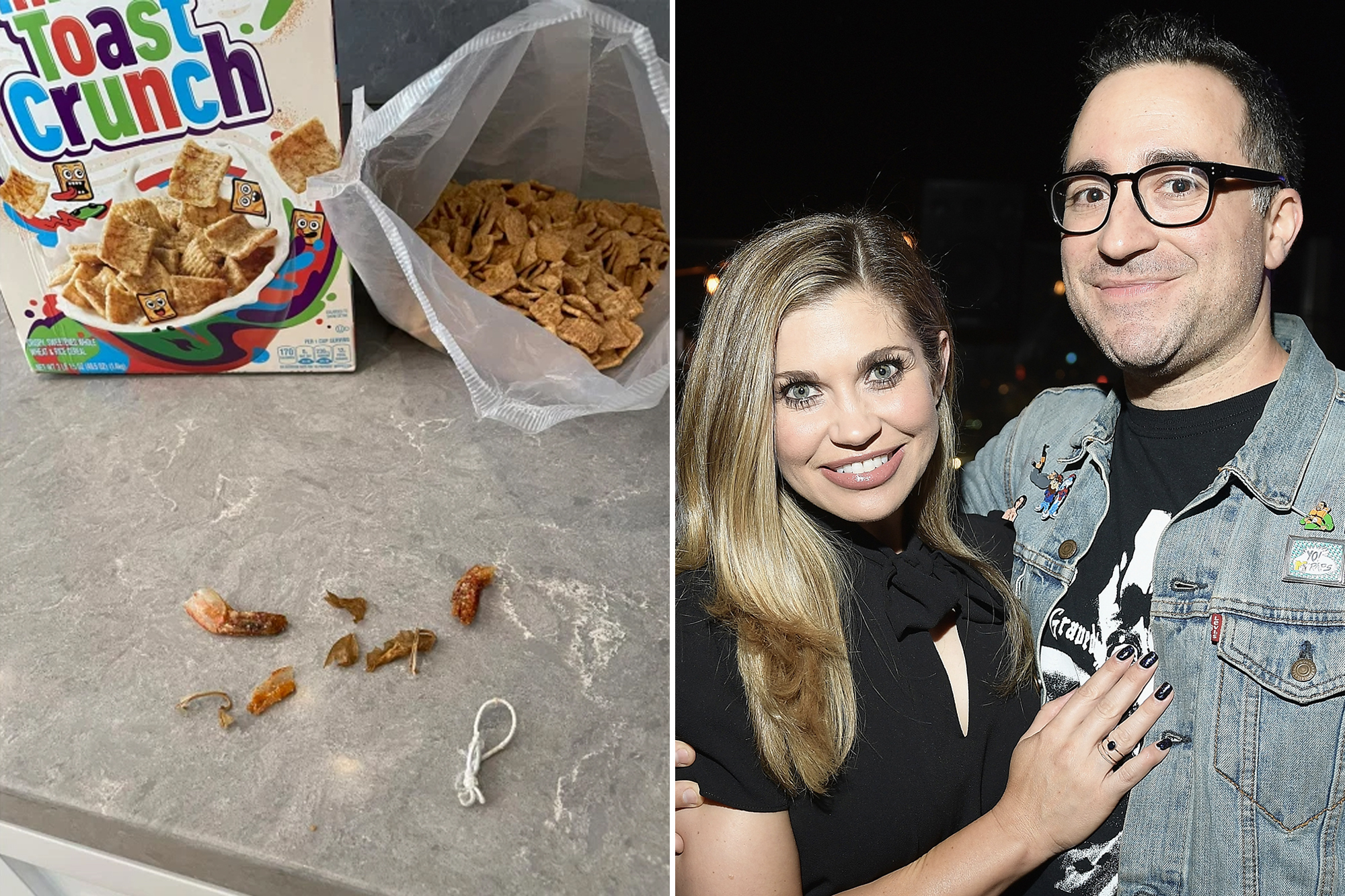 The husband of “Boy Meets World” actress Danielle Fishel Karp, who played Topanga in the 1990s sitcom, went majorly viral Monday with allegations of a very unsavory discovery in his breakfast cereal.

Now, the internet is also blowing up with additional reactions thanks to his famous wife and Jensen Karp is sounding off to The Post. (BTW: Page Six covered their nuptials way back in 2018.)

“Ummmm @CTCSquares – why are there shrimp tails in my cereal? (This is not a bit),” tweeted Jensen, tagging Cinnamon Toast Crunch’s official Twitter account and posting an image of what appear to be sugar-coated shrimp tails in a now-viral tweet. In a follow-up tweet, Jensen looped in General Mills, the producer of the popular breakfast cereal.

“We’re sorry to see what you found! We would like to report this to our quality team and replace the box. Can you please send us a DM to collect more details? Thanks!” Cinnamon Toast Crunch wrote back, to which Jensen responded that he’s “not sure I’m ready for another box!”

“She’s honestly mad,” Karp told The Post of Danielle’s current feeling regarding the situation. “She is really disappointed in General Mills’ statement and hoped to see more concern, rather than just tell me it was actually sugar, not shrimp tails (which is insane). People are allergic (I am luckily not) and their main focus should be finding out how it happened to help anyone who could also run into this.”

Following “further investigation,” Cinnamon Toast Crunch informed Jensen that the image he posted showed not shrimp tails but “an accumulation of the cinnamon sugar that sometimes can occur when ingredients aren’t thoroughly blended. We assure you that there’s no possibility of cross contamination with shrimp.”

“’Accumulation of sugar particles,’” Danielle responded, “I am truly at a loss for words.” She also tweeted emojis of shrimp and heartbreak.

After further investigation himself, however, Jensen alleged that there really were “cinnamon coated shrimp tails” in his cereal, of which he said he had already eaten a bowl. Since then he apparently has covered the cereal box with Post-It notes, which warn, “DO NOT EAT.”

“Before I had the shrimp tail plop in the bowl – I had eaten a bowl. This is a bummer,” Karp told The Post.

“I wasn’t all that mad until you now tried to gaslight me?” he accused the brand.

He went on to say that when he further explored the cereal bag, he supposedly found string, as well as cereal squares containing black marks. Another bag in the family pack — which the couple reportedly purchased at a Woodland Hills, LA, Costco — appeared to be “taped up” and looked to contain dental floss.

“I am going to get the black stuff tested today,” Jensen wrote Tuesday morning for those following his inedible escapade. “Most importantly, nothing new from General Mills since they asked me to send them the shrimp tails that they had tried to convince me was sugar.”

In a statement to The Post, a representative for General Mills said the company is still looking into the incident.

“While we are still investigating this matter, we can say with confidence that this did not occur at our facility,” said spokesperson Mike Siemienas in a statement. “We are waiting for the consumer to send us the package to investigate further. Any consumers who notice their cereal box or bag has been tampered with, such as the clear tape that was found in this case, should contact us.”

In the most recent update to the saga Tuesday afternoon, Jensen shared an apparent direct message conversation with Cinnamon Toast Crunch in which the brand reportedly said they “reached out” by phone and left a voicemail and also wanted to “setup” a FedEx pick-up of the items. In his reply, he said he “won’t be giving you the stuff,” adding that their initial response “calling it sugar was super weird and the fact that you haven’t said anything to the contrary doesn’t allow me to trust you with it at all.”

Jensen went on to say the company was “being super sketchy and odd” and said they should email him “for any further correspondence.”

He also previously responded on Twitter to those who have accused him of faking the foreign object cereal items.

“Something regarding the stupid ‘Did he fake this’ take: there are black items COOKED ONTO the squares and tons of it at the bottom of the bag, in addition to shrimp tails and other SUGAR COATED junk. Also, it’s only ‘viral’ because of their insane response. I would’ve dropped it,” he wrote.